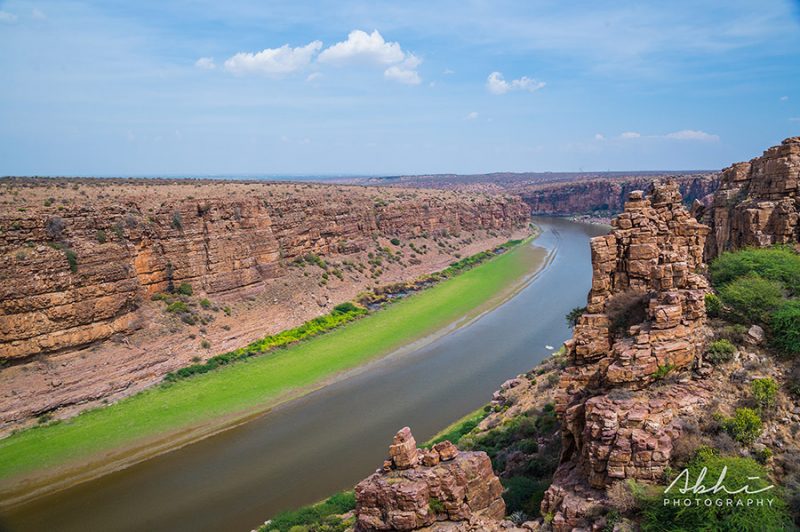 Gandikota is a very small village in Kadapa District of Andhra Pradesh, India. Known to few ardent travelers Gandikota is not the usual tourist hub since it is neither a world heritage site, nor is it marketed well by state tourism agencies.

While it deserves so much more, this untouched, unexplored, uncharted place is probably the most unbelievably amazing place we have been to in recent times. A frozen in time village in the middle of centuries old structures such as forts and temples to granary and jail overlooking a 300 feet river gorge reminiscent of Grand Canyon of Arizona with sights of windmills on the distant mountains – never thought all this could be found together in one place.

It is close from Bengaluru, Chennai and Hyderabad from where you can simply drive off over a weekend. The best part, however, is that a trip to this place will let you cover two other interesting places which include Belum Caves – Gandikota Fort – Gooty Fort.

This was my first trip out of Hyderabad city after my move.

Certainly, I decided to go Gandikota also called as “the Grand Canyon of India“. I checked with my colleague Sansar Verma if he can join me on this trip since I found him “like minded” and it worked out with him also. So we planned to go very next day.

A two day camping road trip started on Saturday early morning to cover some places on the way. I took my Vento and started our journey @ 4am, we packed up all the necessary things to cook, eat, sleep, walk in the dark and survive in any kind of weather which gandikota will surprise us with.

We took a tea break around 6 am at a roadside tapri (Tea Stall) and from here my friend drove the car.

We took NH 44 Hyderabad – Bengaluru highway until Gooty, and from Gooty we took a left turn on NH 67 till Belum Caves, the road was fantastic and the weather was pleasant. We had our breakfast (Egg Curry and Paratha with tomato chutney) at roadside Dhaba around 8:30 am.

It took around 6 hours to cover 350 Kms then we reached Belum Caves. We were driving at medium speed and enjoyed the drive. Very little traffic on the highway really helped us to enjoy this drive.

It was the month of March and not so hot but when we reached Belum Caves it was very sunny and hot for March, we took refreshments 🙂.

The entrance pit was originally much smaller than what one sees today. It has been broadened as part of the development of the caves to install the staircase to allow visitors to descend and ascend easily.

The Belum Caves are located near Belum Village in Kolimigundla Mandal of Kurnool District in the state of Andhra Pradesh. These caves are 8 km (5.0 mi) long however only 1.5 km of the cave is open for the public.

This cave is the second largest cave on the Indian Subcontinent after the Krem Liat Prah caves in Meghalaya. here are indications that Jains and Buddhists monks occupied these caves centuries ago. Many Buddhists relics were found inside the caves. These relics are now housed in Museum at Ananthapur.

There is a sizeable Buddha statue near the caves. One of the caverns at Belum is known as the “Meditation Hall”, which was used by Buddhist monks. Relics of the Buddhist period were found here.

After spending around 90 minutes in Belum cave we started our final destination towards Gandikota. while we were passing through villages I collected some cow dungs to get the quickfire setup and a kind person on the spot helped me to get some in the bag.

Once we reached our destination we left our car beside the fort and started walking towards the beautiful gorge and this place was surrounded with all golden rocks and the fort was made up of these golden rocks it was complete camouflage, we couldn’t realize it from a quite distance also.

All these places are all clustered around on the way to the canyon. Only one Madhavrayaswamy temple is a bit off the route.Not wanting to miss the sunset ,  just had a glimpse of the Jail, Jamia Masjid, granary & Ragunathaswamy temple beforing heading to the Canyon. The Masjid has a mighty presence.

Things to see in Gandikota

The beautiful canyon welcomed us in all its glory. The walls of the gorge are multi-layered like a cake.

Orangish brown rocks layered represented millions of years of evolution.  The Pennar river had cut through these tough rocks for eternity for us to enjoy this view now. I didn’t let its effort go to waste and got busy with the camera. I moved from one spot to another to get the best possible picture. The sunset was divine.

From here we decided to trek down to reach the river and will put our tent over there. The view from this place was so amazing, I fall in love with the view and place. But there was a lot more to see and do, so we moved ahead to look for a way to get down.

From the top of the gorge, the riverbed appeared quite nearby and it seemed like a good idea to walk all the way down to camp.

Somehow we took the nearest path with the help of a water pipeline and we get down to the river. This was too dangerous it was an almost 50-degree steep slope with loose sand and stones. But this was the most memorable and unplanned trek we did.

Here we met a shepherd who was speaking in his language that we could not understand and even he was not sure about our alien language, so talk in sign language with him. This was another memorable thing in this trek.

Though it was dark by the time we came up, so we looked up for a place to set our tent and it was done in the next 30 mins.

So I put the Baingan and tomato into the fire for quite some time till it’s baked and took them out, clean them, and made baingan bharta in an earthen pot by giving a spicy tadka to it. And pour some ghee to get the real flavor.

Finally, our dinner was ready and its aroma was making us so hungry that we can’t stop ourselves and we started our dinner with barbeque and ended with Baati and Bharta, the taste was very smoky and delicious. You can imagine after a long day you get such a portion of delicious food and you feel satisfied.

These guys came from Bangalore and were not prepared with any food neither they found in a nearby village and they praised us for this delicious food.

This is how our day ends late in the night with wonderful memories.

The next day, the Gorge view of river Penna in the early morning with bird chirping sounds was a fantastic view and an amazing spot for photo shoots.

Then we started our return journey towards Hyderabad at 8 am and reached home around 5 pm.

Highlights of this trip

Some random clicks of this trip